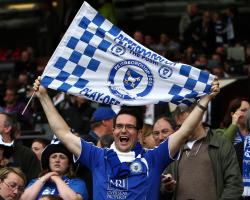 Peterborough 0-3 Bristol City: Match Report - view commentary, squad, and statistics of the game as it happened.Robins fly past PoshBristol City cruised four points clear at the top of League One courtesy of a 3-0 television demolition of free-falling Peterborough.Steve Cotterill's pacesetters took command with two goals in the space of five minutes at the newly-named ABAX Stadium.Luke Freeman fired the opener with a fine finish on the turn after a cut-back from former Posh full-back Mark Little had not been cleared.And City soon doubled their lead as skipper Aaron Wilbraham provided a fitting headed finish to a glorious Joe Bryan cross.Marlon Pack thundered a volley against the bar before City eventually clinched maximum points four minutes past the hour when Freeman drilled a low shot through a crowd of players after collecting a quickly-taken Pack free-kick.It proved to be a miserable reunion for Posh's legendary 'Mac-Attack' strikeforce

Craig Mackail-Smith and Aaron Mclean have both returned on loan, but neither looked like adding to their combined tally of 182 goals for the club.City goalkeeper Frank Fielding was only required to make one save when keeping out a low shot from Marcus Maddison as Posh tamely crashed to a fifth defeat in their last six league games